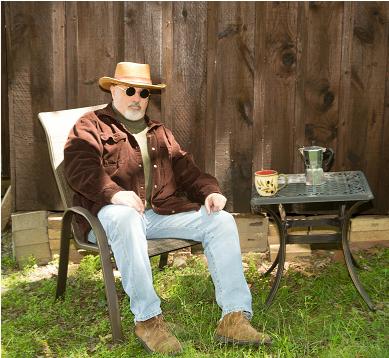 We got a chance to talk to, Author, Eccentric Poet, Radio Host and a man known as, America’s Simple Man. We are happy to say, welcome Doc Dalton.

1- We are happy to have you with us and would like to ask you to describe yourself to our readers so they could learn more about, America’s Simple Man.
To start off with, I would like to say thank you for giving me the opportunity to share my story. To your question about describing myself, my answer has gotten me into hot water a little and this is why. I have said on more than one occasion that I feel as if, I could be the eccentric love child of Bob Dylan and Willie Nelson if they could have a child. I say that because I tend to think and act differently than most folks. I am not into high energy Bull S _ _ _. I want life to be simple and enjoyable. I want to write as much as I want to. I want to enjoy God’s gifts as much as I want to mean, the trees, stars, mountains, sky and of course the air. I would rather sit by myself with a good cup of coffee and some peaceful music while talking to the spirits that surround me, then to sit in a crowded room of people who think they know it all, while everyone there knows they don’t and yet for some unknown reason of cowardliness, we must sit there listening to them throw out useless words of nonsense. If need be, I can be my own best friend, so why take part.

2- You mentioned writing and music, do the two ever cross paths and if so, why?
I am a Believer and what I mean by that is I Believe in God 100%. Lots of my poems/stories have God, Jesus, Heaven and Angels in them. I am a Believer in my own way and really don’t want anyone telling me how I should Believe. Simply put, I could get to Hell on my own and don’t need anyone’s help getting there. I Believe in my inner honesty and feel, Jesus does too.
As far as music goes, I don’t play but do have a full orchestra roaming around in my head and it does influence me at times. My perspective is a bit different with some poems I have written such as My Bible and a Beer, A Shot of Cuervo and some Jesus to go, Devils Lie’s and Whiskey and a Prayer. No, I am not an alcoholic, but do get influenced by certain artist/formats.

3- Any artists that you can think of off the top of your head, that have motivated you?
Right out of the gate I would say, Darrell Scott is one of those artists whose words truly get to me. He’s a favourite for sure. Ray Wylie Hubbard is another who is so far out there, that it is impossible for me not to admire him. A couple more would be James McMurtry, Robert Earl Keen and Rodney Crowell who I got a chance to interview in New York City over 20 years ago. On the female end, Alecia Nugent does it for me. That voice, it takes me away and puts a smile on my face. Allison Krauss the exact same thing and Rosanne Cash is perfect for my head.

4- From prior interviews, we learned that you suffer from depression and have been hospitalised several times. Is there anything you would like to say about that?
Yea, it sucks. It’s not fun. It takes me to places in my mind that scare the s _ _ _ out of me. Almost ended it all at one day because I was tired of it all and was very happy the next day that I didn’t because I had plans. That’s how crazy it could be and it’s even worst. For those who say they understand, if they never had it, they don’t understand. If someone has it, get help and talk to the right people and don’t put it off, waiting one day, could be one day too late.
I have also been diagnosed with a disease called, Sarcoidosis and have learned that some side effects from this are depression. The late comedian Bernie Mac suffered from this.

5- You told us that we could ask you anything, so in saying that, there is a rumour about the so-called friends in your head. Can you tell us about that?
First off, It’s not a rumour, it’s true, I hear voices and have so for a good period of time. They tell me who and what to look out for. They give me words for some of my poetry. My wife and daughter call me the Mayor of Lost Souls because people are always calling me on the phone or stopping me saying they need my advice because I have helped them with things that they had asked me. I can’t explain it because I can’t help myself most times, but it’s more like a feeling. Not only have I heard things but seen things and it has all been verified. Even this crazy election, I had a dream about one year prior to the election and told my wife in the middle of the night that not only would Trump win but would do so at the very last moment of the election and would do so big and many would never see it coming. The other thing that was said to me was, it was God Choice. All that was said to me, happened.
I have said more than once; these friends have gone through some dark and scary times with me and have seemed to care about me when I didn’t care for myself. They are loyal and I appreciate that. For those who don’t believe, I could give a rat’s ass less, because I am not here to prove anything to anyone. If you like my words, my stories and me, that’s great and if not, that’s OK too because, at that point, all we need to do is move on. So let’s do just that, move on. 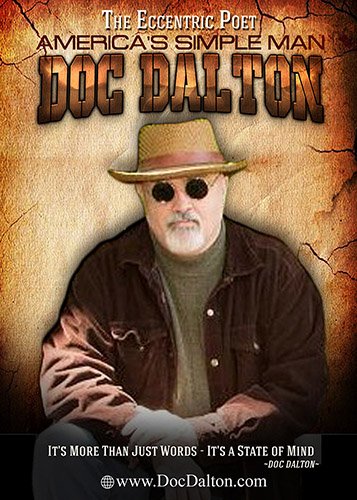 6- Tell us about the name, America’s Simple Man and where that came from.
It all started with a poem that I wrote about myself called, Simple Man. After that friend started calling me, America’s Simple Man. I made a decision that I needed and wanted to keep my life as simple as possible and that included keeping it simple in life, business and faith.
Life is at times a tough one, but I manage. Faith for me is 100% from within so for me, it’s just fine. The business I took a different approach because of something that I had heard. I took a piece of paper and wrote down everything that I personally would want in a company if I was to be associated with them. I had a number of requirements and it was as if I was interviewing them to work for me. When I was done, I searched for an on-line company and my goal was to find a company that had at least 80% of what I was looking for. When done, I found a company that had 100% of what I was looking for. Those requirements ranged from, Leadership, company structure, compensation plan, cost, difficulty, long range goals and reputation. Common sense and simplicity played a role in this and when all was said and done, Success had to be gained in only 3 Simple Steps. Now I am putting together an income type team that will take this concept and work it. It’s all about being a mentor to my team and creating an army of mentors so people can gain success in the easiest way possible while making their lives a simpler one as well.

7- Besides poetry, you have also written a number of books that will soon be released.
Yes. All books are Spiritual and are a combination of poetry and short stories. Every story explains why that poem was written and what was behind it. Please understand, I never claimed to be a wonderful writer because I am not and I say that at the beginning of each of my books. What I do claim to be is an honest writer who tells his story his way. Readers may not always agree with me in what I say, but they will always know, that I am honest in what I say.
The first book in 2017 is, “It’s A God Thing” Second book is, “That’s the Beauty of it All” and the third is, “When God’s Angel Became My Friend”. I have more being released in 2018 and 2019. I recently retired a book in early 2016. Let’s just say, I wasn’t a fan of my own book. 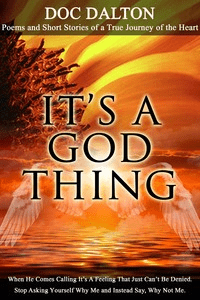 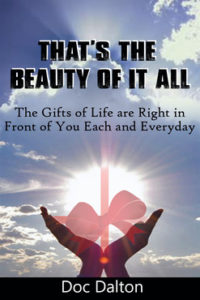 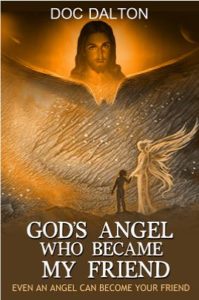 8- Are there any surprises coming in the near future for America’s Simple Man.
There has been talking about doing a video series, possibly a weekly one. At this time, a few ideas are being thrown around and as far as time length and things like that, we won’t know for a little while. Two things that I do know is that it will be shot at different locations and will be simple done. When I say locations, I am talking about from the deepest part of the woods, to under a freeway on the busiest of highways. I wouldn’t have it any other way and neither would my friends. Sorry, couldn’t help myself.

9- Getting back to poetry for a moment. It has been said that you have said, poetry saved your life. Can you explain that?
When I was hospitalised for depression, a doctor suggested that I try my hand at poetry. On a personal note, I thought he was a bigger jackass then I was. But being locked up and having no place to go, I said why not. I am happy to say it was the best thing that ever happened to me.
My mind was 100% open, I wrote about things that I never gave myself time to even think about. There weren’t any boundaries and I was able to write about life, my life, my pain, my thoughts, my feelings. But the craziest thing that took place was, that nearly 90% of my words had God, Jesus, Angels or Heaven in them. I was writing spiritual poetry and hadn’t a clue where it was coming from, but what I was sure of, it brought me great peace from within. I truly believe it saved my life and for that, I am grateful for. 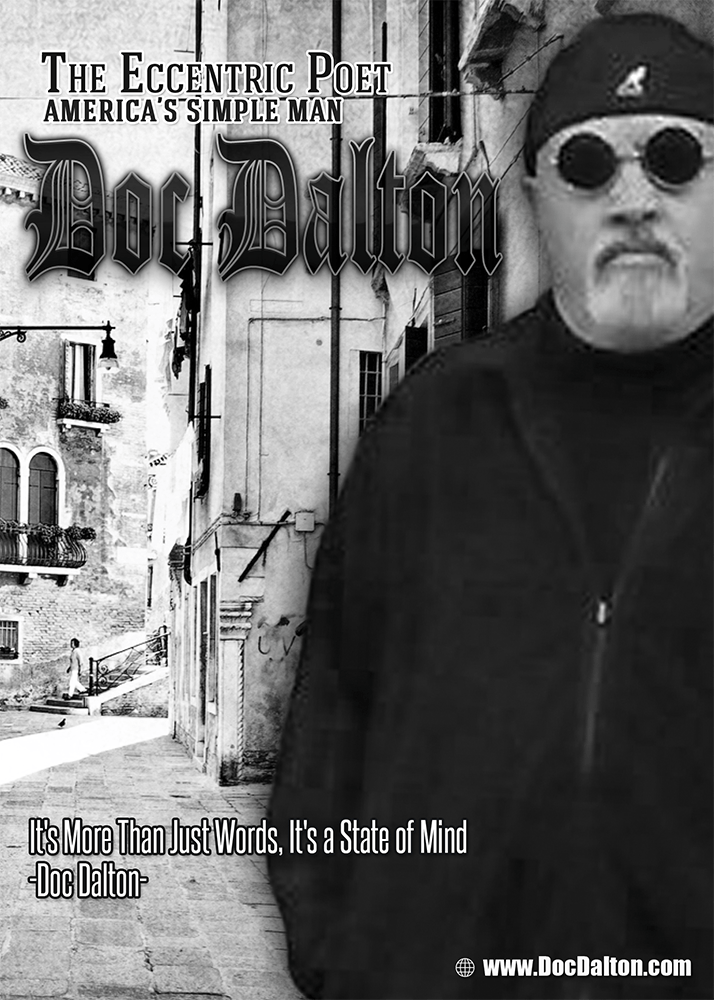 10- In closing, we want to say thank you for spending some time with us and can you tell our readers where they can learn more about you. As in other interviews, you were asked to give the last 4 lines of your most recent poem. Can you please do that for us as well.
I would like to say thank you for letting me be here with you, for that I am truly grateful. It’s simple to find me, all folks need to do is go to www.docdalton.com, everything you need to know is there. And as far as 4 lines, it comes from my latest poem, “Whiskey and a Prayer.”

My days are so crazy, my mind is so damned confused
I am worn out, battered and bruised and at times even a bit amused
It’s been so bad that my spirit in anger gave my soul a dare
And I excepted and will do so, only after some Whiskey and a Prayer